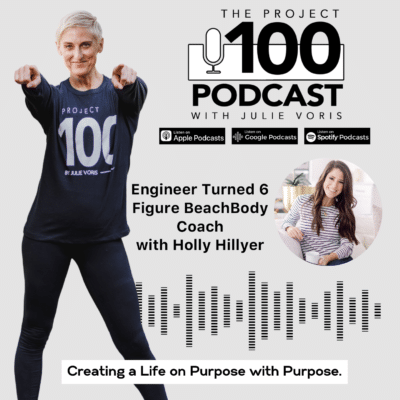 In this episode, Julie interviews Holly Hillyer – engineer turned multi 6 figure and 4x top ten Beachbody team coach. Despite starting out in the corporate world, Holly learned that passion and purpose often come in different forms.  Holly describes how taking a chance on her own success led her down an amazing path to helping other women do the same.

I let listeners know that we discuss mental health issues in this conversation, including the topic of suicide. Please listen to as much of this episode as feels right to you.

[06:25] Growing up, moving around and the stigma of mental health issues

Growing up Holly moved about every two years. Her dad was in the printing industry – magazines and newspapers – so back then it meant they had to move if he lost a job, or got a promotion. Holly explains that this didn’t really bother her at all until about eighth grade. As a kid she loved it (kids are so resilient!) but in the middle of her eighth grade year she started to experience really extreme bullying. To the point where she pretty much isolated herself completely. She didn’t want to eat with other kids, or even hang out with anyone and for the first time she experienced depression. Holly also mentions that her grandmother committed suicide from depression, so the family were acutely aware of the impact mental health issues can have on families.

Holly really feels that this is just as important to talk about as it is when someone has cancer or heart issues in a family. Over the past few years it has become more standard to talk openly about mental health but there is still a long way to go.

Holly’s mother also suffered with mental health issues so she knew the importance of getting the right kind of help. Coming out of that early depression was helped with the support of her family and friends and it also led to the family deciding that they would not be moving again. Her father did the commuting when needed for work, but they appreciated the stability for them to stay in one place. Holly’s dad lived in Chicago and the family stayed in Virginia, flying back and forth. Her mom really raised them on her own and she appreciated that, as well as her father financially supporting them.

What this showed Holly was that she really craved her own financial stability when she was older and to stay in one place.

Holly decided that going to engineering school and working for Anheuser Busch was where she would find that stability she craved. It was quite a journey for her. She was a production supervisor on the floor – a 21 year old female over a union workforce of guys. She admitted she had no idea what she was walking into and one of the biggest lessons she learned during that time was how important it is to just be humble and always hungry to learn. It doesn’t matter where you are in life, or what age you are, or what your title is – we all have something to learn from other people.

Holly felt lucky that someone took her under their wing and helped her in those early days and she will never forget it! He really helped her form relationships with the men she had to oversee, and to understand the culture and how things worked.

She knew that treating people like human beings would be the most important thing and she admits it became one of the most fun jobs and she learnt so much.

Holly also switched roles because she didn’t want to experience what her dad had in production. She decided to enter a whole new industry: government consulting. She got to work with some very smart people in a think tank and worked on some fun projects. Holly also shares her early dating stories–she dated the same guy for seven years all through college and then moved up to DC to be closer to him when she got this new role.

But it also hit her that while she was moving to have a more stable job and the freedom she had craved, it was also to be with someone who she didn’t really know if they had a future together.

At age 25 when she was living with her long-time boyfriend, she couldn’t help but see what society was expecting of her: planning a wedding, kids etc. On the outside it looked perfect–they both had well paying jobs, a nice life, a lovely home etc. but she took the decision to move out and live on her own. It was a really pivotal moment for her because it’s when she realized she was strong enough to stand on her own and that she did not need a man to make her strong.

[20:56 ] Being inspired by passionate people

Working at DARPA on government projects, Holly had the opportunity to learn lots of skills in strength and resilience, as well as passion. One of her first clients (a multimillionaire) had extremely high standards and was so passionate about what he was doing and the projects he was involved in. For her to be alongside people leaning into their purpose was really powerful.

It was actually the first time that Holly ever saw someone doing what they absolutely love in their life and it was inspiring. He asked her one day what she really wanted to do, and when she said she was happy climbing the corporate ladder he pushed her to think about what she really wanted out of life, and she had not really considered it until then.

Holly used to blog because she hated being bored. She also learned how to decorate cakes really well, even teaching herself how to create full wedding cakes. Her colleague also made cupcakes and one day their boss offered them $100,000 each to go start a bakery outside the metro stop! Even though they had $200,000 offered to them to start a bakery, they really didn’t want to exchange time for money, but it did help Holly to realize the power of dreaming big.

Eventually Holly did stumble across her passion: the world of online business. She started as a challenger in a virtual health program for her community after moving with her fiance to California.

Holly was experiencing depression again and the community that the online fitness community gave her helped her out of this state. She was keen to do things her own way, and she did, and it worked! She was building a brand on her own terms and training herself to be the CEO of her company.

Seeing other women in the online business was so empowering for Holly in those early days, despite having no family history or other examples of success on her own terms. Holly explained how she really is no different from anyone else wanting to grow their business – she stuck with it, she learned the skills she needed and she stayed consistent. She knows that anyone with a vision can do the same if they really want to.

Holly also loves setting up proper systems (as an engineer it’s natural for her!) but likes to remind her team and her coaches that slow or negative results aren’t personal – you just have to remove the emotion or feeling of failure and keep moving. She also likes to help her team set themselves up for creating and maintaining wealth in all areas of their lives beyond a Beachbody business.

Holly shared her morning routine includes drinking Energize, performing morning affirmations, writing in her happiness journal and reading her personal development books for her mindset. This is also how she creates daily content from inspiration. She also does 10 minutes of meditation when she can. Her favourite books are You Are A Badass (Jen Sincero), The Miracle Equation (Hal Elrod) and Untamed (Glennon Doyle).

Holly also shares her Project 100 insights that include living in alignment with her values which include family and business.

Resources from this episode:

Spotify – wake up, wind down 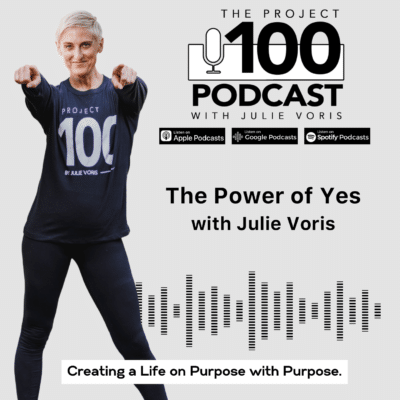 Julie Voris: The Power of Yes 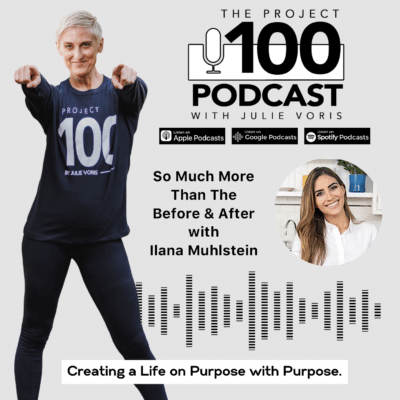 Ilana Muhlstein: So Much More Than The Before & After 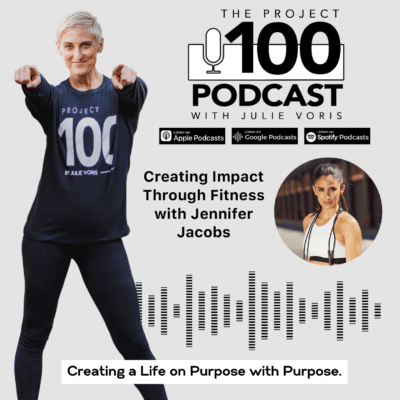 Read
Ready to
Create Magic in Your Morning?
To make life change faster and easier, find the morning routine that fuels your soul and fits your unique lifestyle!
Grab my Morning Video Series Now!
Open

Subscribe to my monthly email for fun and wisdom around fitness, recipes, family, travel, and so much more.
P.S. I hate SPAM!
© Copyright 2022 Julie Voris • Privacy Policy • Terms of Use
Site designed by Dropleaf Co + K Design Co.